The English word “represent” derives from the Latin repraesentare, which means “to make present, to set in view, show, exhibit, display” and as such, instantly points out to an act of describing; a language that brings something to mind by substitution; to put something in sight on behalf of.

Representation is often intertwined with demarcations embedded in Western thought; reflecting on the dividing barriers between science|non–science, nature|culture, self|other, subject|object, time|space, etc. Only when these borders get disrupted / \ / \ \ / both intellectually as well as visually / \ / / this orientation might be challenged.

In Evelina Hägglund’s drawings, I see numerous lines collapsing, a losing sense of clear depth and direction; before = after = above = below = left = right; disturbing a mental compass through a lack of departure points that otherwise would help to position view and boundaries. In her sketchbook she continuously draws lines that are { warped {, – never straight -; /tilted/, < refracted >, ~ troubled ~, just as a horizon only gives an illusion of being stable. 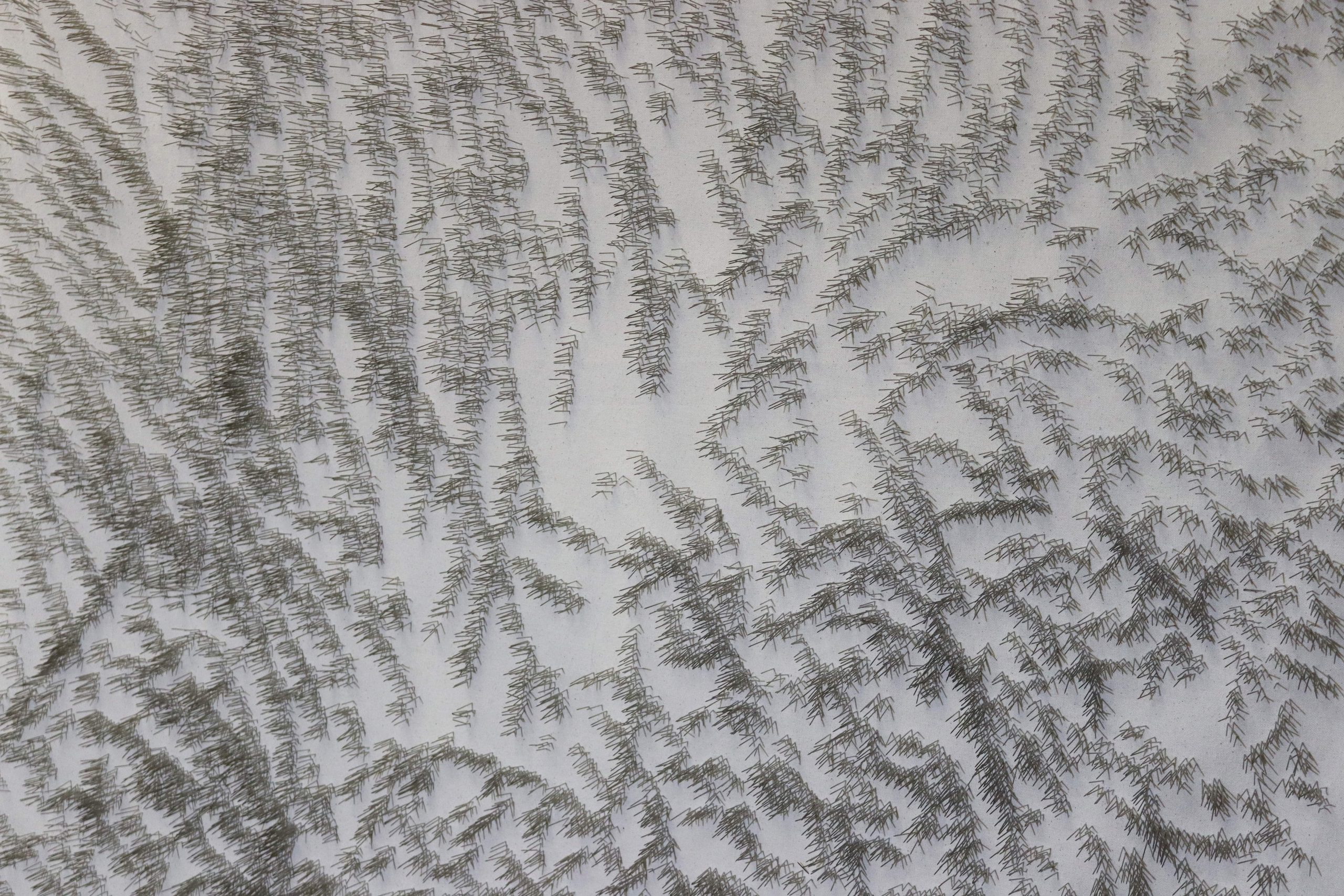 Where Nature Ends is composed by a selection of works that I feel  ~curve, [crook, <bend, #blur, – pin and *erase* dualisms through their material formulations. Using steel, jesmonite, pins, iron filler, plaster, wood, hessian, canvas and graphite as her tools, Hägglund questions representation and explores its potential beyond fixed boundaries.

Piercing pins through the surface of the canvas, the work Other (2019) riffs on the repetitive persistence of a honed language tied to property and border making. Through recomposing the power of representation as a material language strongly tied to capture, erasure, marking and description, I see Hägglund’s Other connecting dualisms to surveyor symbols.

Friedrich’s Rock (2020) suggests the marking of an immense landscape of the famous sublime painting “Wanderer Above the Sea of Fog.” Through removing both subject and horizon from its spectacular vision, Hägglund questions the limitations of the painting’s point of view. She erases both “Nature” and “Man” from its perspective and enhances its narrow sight by the work’s surprising material flatness.

The three–piece sculpture Rule of Three (Veni, vidi, vici) (2020) refers to the ancient Latin quote of Julius Caesar: “I came, I saw, I conquered.” These violent objects, titled after a rhetorical rule used for imposing truths, expose how a hierarchy, empowered by the one who persuades, becomes visible, and yet, renders a deception.

The large-scale Untitled (2021) graphite drawings, one on canvas, the other on hessian, show Hägglund’s process of destructing an image (almost as an inversion of her pinwork). Through her drawings she reveals a process of unlearning and questions what the potentials are of relearning the world as represented. 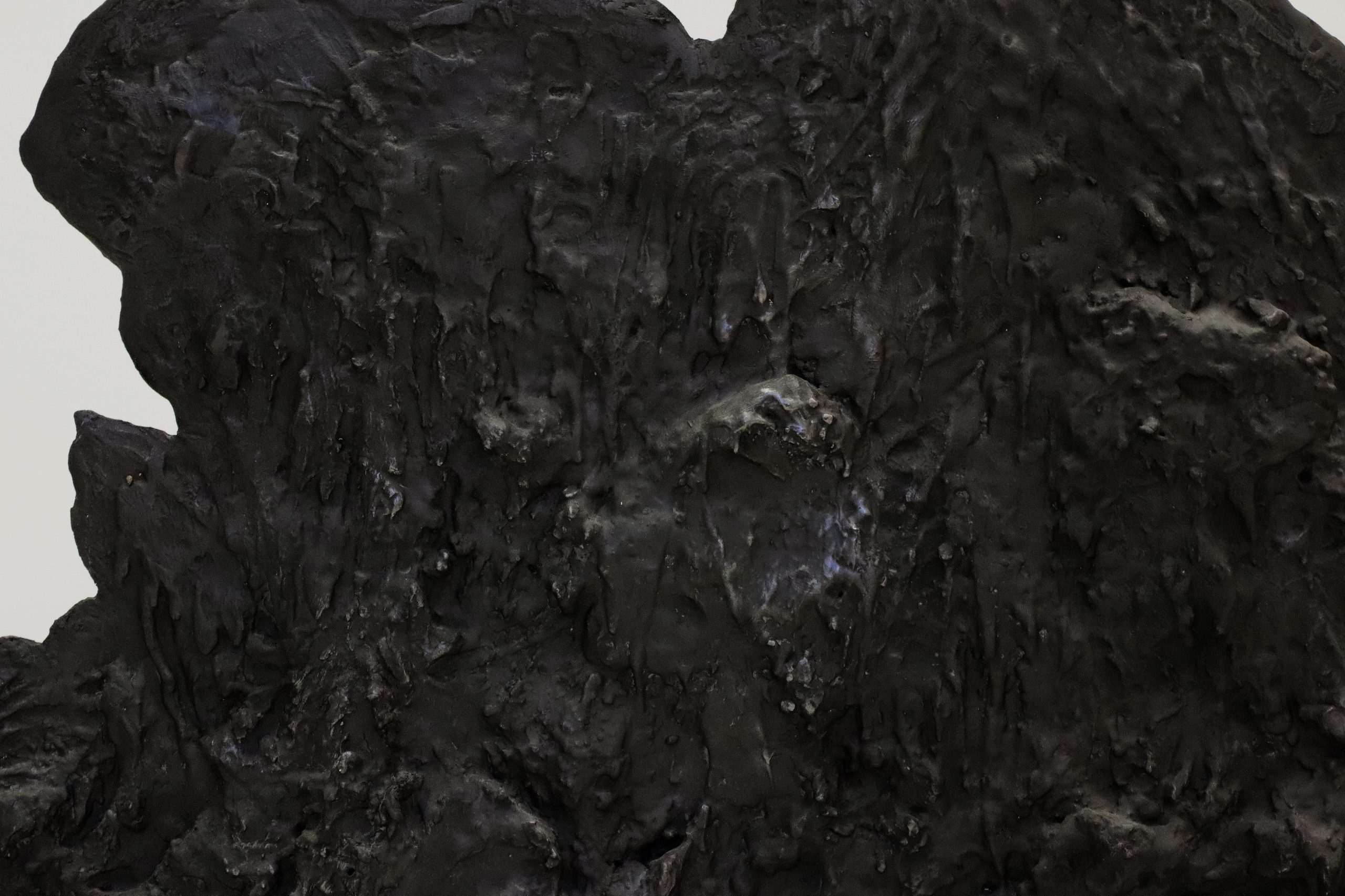 Evelina Hägglund (b. 1992) is an artist who works within the field of drawing, object making and site specific sculpture. She graduated from A.V.A – the Academy of Fine Arts in Ljubljana in 2018 and is currently completing her MFA at Goldsmiths, University of London. Her work has been shown in solo and group exhibitions at Jakobsbergs konsthall in Stockholm, Sweden, Plaza Protocol in Ljubljana, Slovenia, the Kiribati National Museum, Tarawa in Kiribati, NiNa in Warsaw, Poland and the Temporary Gallery in Cologne, Germany, amongst other. She was a resident at Transborder in Slovenia/Austria (2019), Land404 in Sweden (2018) and at the Lode Brick Factory in Latvia (2018). www.evelinahagglund.net 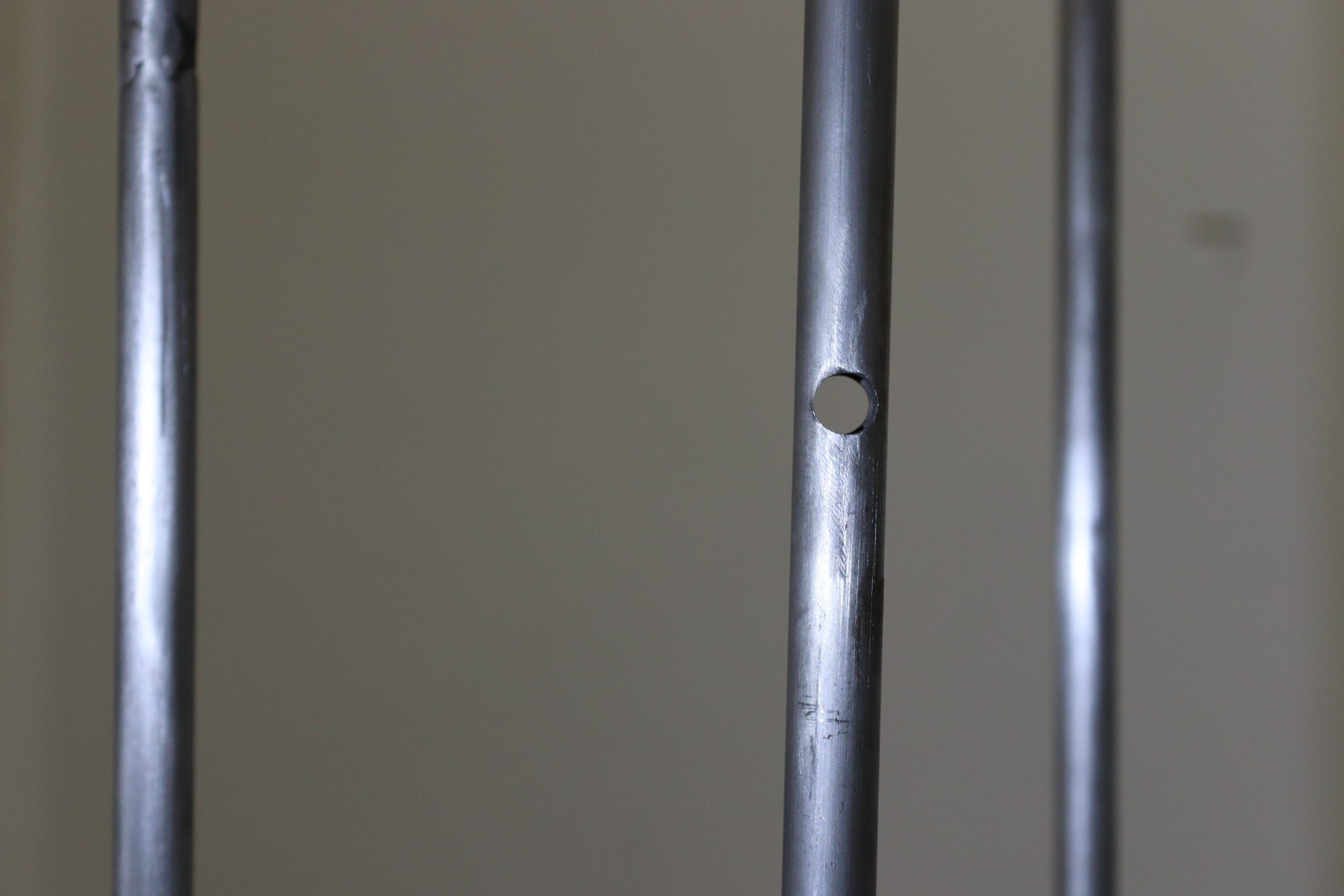 Presenting never-before-exhibited works, appearing to the audience from behind closed doors due to Covid-19 measures, the works in Where Nature Ends are unable to fully expose themselves physically to an audience. The removal of intimate and up close interaction between the works and the viewer renders them silent, untouchable, inaccessible. The glass of the window becomes the only mediating border through which the works become visible, perhaps guarding some of their embedded violence or awaiting to be traversed. 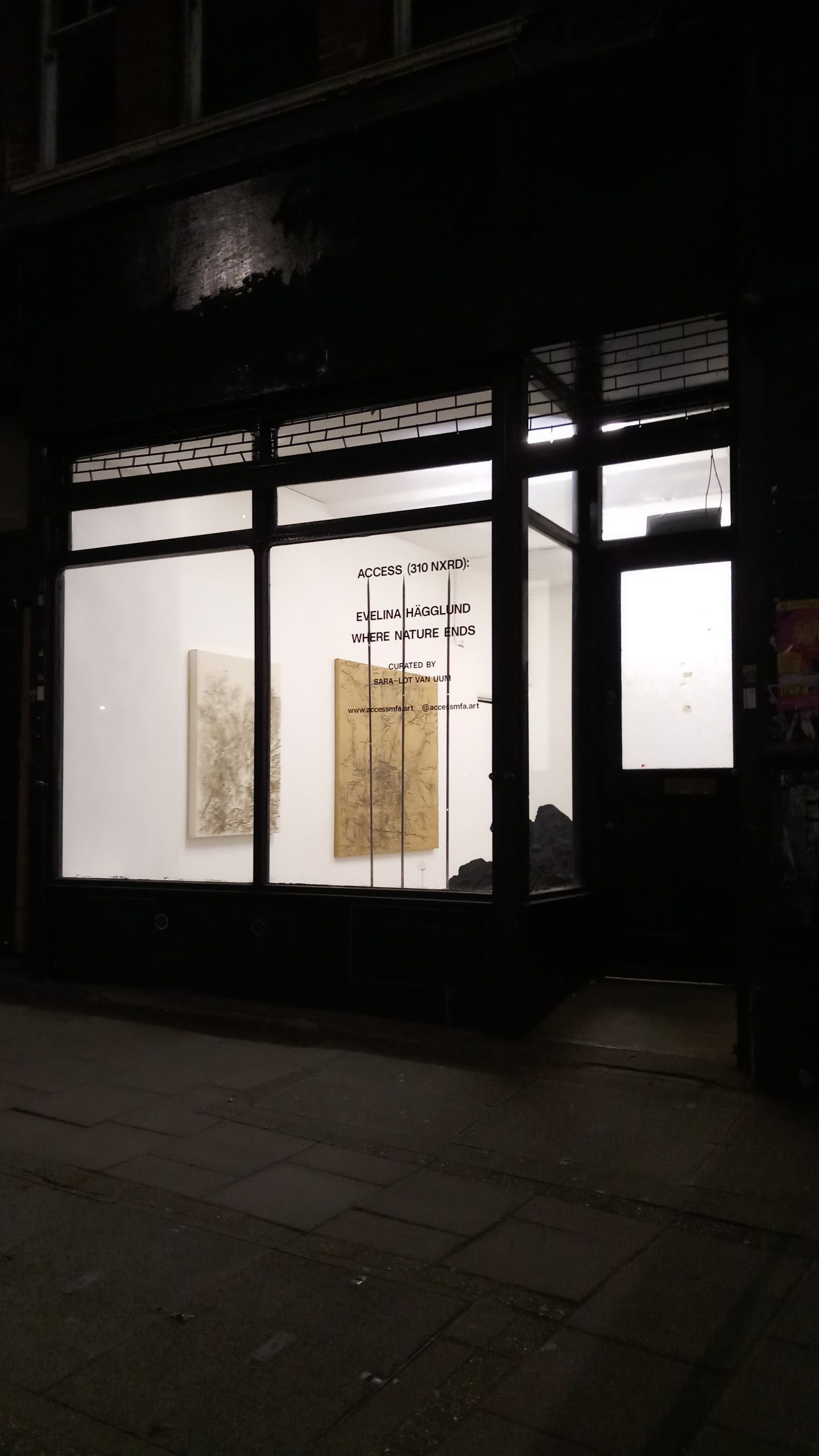